A commonly adopted definition when studying regional innovativeness is stated in OECD’s Oslo Manual that provides guidelines for collecting, reporting and using data on innovation: “An innovation is a new or improved product or process (or combination thereof) that differs significantly from the unit’s previous products or processes and that has been made available to potential users (product) or brought into use by the unit (process)”. The key to this definition is that innovation has to have enough utility and demand (market potential) for it to be implemented or to be introduced into the market. Otherwise, it remains an unimplemented invention or an idea left in the desk drawer. However, there are varying other ways to define innovation depending on the exact aspect of innovation under study. This naturally leads to difficulties in cross-study comparability: different reports use different definitions and varying metrics for measuring innovation.

Again, as defined by OECD, Research and development (R&D) expenditures is the money spent on creative work undertaken on a systematic basis to increase the stock of knowledge and the use of this knowledge to devise new applications. Additionally, the number of R&D personnel is also commonly used as an innovation indicator. As can be seen from the very definition of R&D expenditures, the indicator measures work towards invention and further innovation. However, not all R&D will lead to innovation: some projects fail altogether, the location of the conducted R&D might not coincide with the company (or organisation) that eventually introduces the results into the market, etc. Thus, R&D statistics indicate which regions are the most heavily engaged in development work towards innovation, but the figures do not necessarily coincide with actual innovations. The upside of R&D data is its good availability on a sub-regional (seutukunta) level.

The most innovative sub-regions in Finland measured in R&D expenditures.

The dictionary definition of a patent is a document that proves an official right to be the only person to make, use or sell a product or an invention. Thus, patent statistics indicate where technological inventions emerge. As a measure of innovativeness, patents are directly linked to inventions – novel technological solutions – with market potential. The major downside is that not all inventions are patented or even patentable, there are huge variations in the market value of patents and that not all patents are eventually introduced into the market (and, thus, become innovations). Therefore, patents are ill-suited, for example, when measuring the innovativeness of the service sector. The number of patent applications per country are so small that they do not commonly cater for municipal comparisons. For example, according to the statistics of the Finnish Patent and Registration Office only one patent application was filed in Åland in 2020. Therefore, national comparisons in Finland are commonly made in the provincial level.

The most innovative provinces in Finland measured in patent applications.

Finally, innovation counts, reported in VTT’s SFINNO database indicate where the actual innovations are stemming from. That is, where are the innovative companies – that have introduced new products, services or processes into the market – located. SFINNO is a longitudinal database of product, service and process innovations commercialised by Finnish businesses from across the country. In short, the SFINNO database is essentially compiled on the basis of a systematic expert screening of different technical and trade publications to identify innovations. The database is unique and similar data is not available for most countries. A notable exception is Sweden. Naturally the innovation counts reported in the SFINNO database are based on a sample of relevant technical and trade journals but cannot cover the entire universe of potential outlets of new product announcements. Thus, they present a sample of all Finnish innovations. However, and most importantly, it overcomes the most pressing shortcoming of the other commonly utilised innovation statistics: the data it is reliably linked to actual innovations rather than on inventions or inputs only potentially leading to innovation.

When measured in innovation counts, in absolute terms, the most innovative sub-regions correspond by and large with the most populous and R&D intensive cities of the Finnish provinces that also produce the most patents. In relative terms (per number of firms), however, the league table below shows interesting results: Norther Satakunta emerges as one of the TOP-5 most innovative sub-regions of Finland. The sub-region is small (ca. 20 000 inhabitants) but hosts an impressive number of innovation counts contra its size. 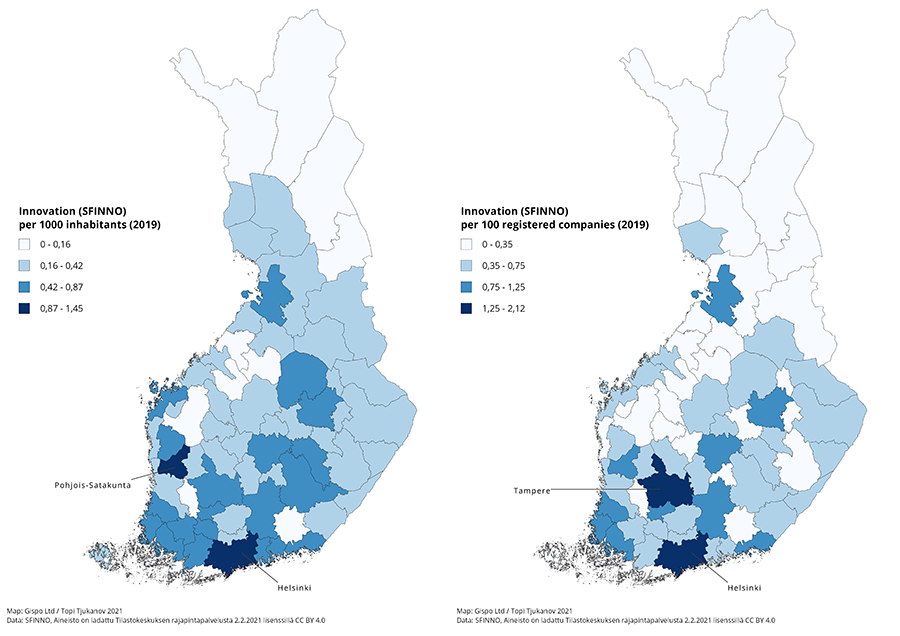 The most innovative sub-regions in Finland measured in innovation counts.

This tentative picture of the geography of innovation in Finland raises a number of interesting observations that lead to questions explored in the further stages of the COSPIN project. The standard “rules” of agglomeration economies do not “universally” apply in Finland: urbanised regional economies seem to have an advantage in innovation but exceptions to this rule did emerge. The link between innovation inputs and outputs is not geographically straightforward: the most R&D intensive regions are not a perfect match with the regions producing the highest innovation counts. Therefore, it will be interesting to test which regions are able to utilise these agglomeration forces via knowledge generated within the region and which regions excel in integrating knowledge produced elsewhere in their own innovation processes? That is, what role do knowledge spillovers play in the geography of innovation in Finland?